Access our library of articles, videos and proceedings for members only. 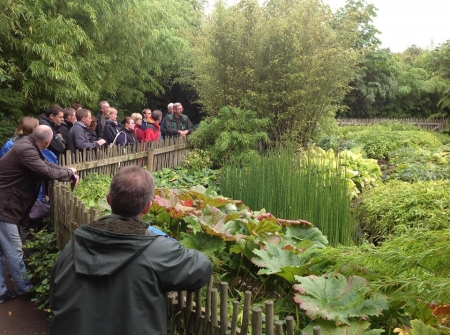 WELCOME TO THE IRELAND PAGE

Dónall Flanagan reports on the Ireland Area Meeting in September, where we learned how important horticulture is to Dublin Zoo.

Dublin zoo is an institution, everyone in Ireland will have visited it at some point in their lives. For those Irish IPPS members who had not been since our school trips many moons ago this area meeting in September was an eye opener.

Zoos everywhere have developed over the last 20 years or so to create habitats rather than enclosures for animals and Dublin is a prime example of this. Stephen Butler, its curator of horticulture, explained the historical development of the site and new opportunities that came their way with the most recent development of the zoo.

The zoo is divided in to a number of habitats including an African savannah and Asian rainforests. For example the Kaziranga forest trail is inspired by Kaziranga national park in north east India – it evokes the Himalayan glades and is home to the zoo’s Asian elephants. Planting here includes bamboos, magnolia, gunnera, cardiocrinum and Equisetum camtschatcense. Each habitat has a signature plant and in the Kaziranga forest trail it’s bamboos.

The zoo is also home to Ireland’s National Libertia Collection and these plants look perfectly at home in the savannah habitat.

We learned that there is a very active network of horticulturists in the zoo horticulture group of the European Association of Zoos and Aquaria. The knowledge that they might ‘seek and share’ could, for example, be plant species that are unpalatable to monkeys or whether a particular plant may be poisonous to any animals or to people.

With 1 million visitors a year to a site of just 28 ha, attractive yet resilient planting is essential. Prevention of compaction to ensure survival of established trees is crucial to maintain the character of the zoo and integration into its parkland setting. Grass and plastic cell web are used in a number of enclosures to prevent root damage. Animals with smaller feet cause less compaction and where damage is expected urban soil mix is used with cell web and grass seeding. Air spades are used to relieve compaction where it has occurred. To help make the zoo appear less crowed with visitors the landscape design includes winding paths and screen planting to bring a sense of mystery and avoid the feeling of being in a long queue.

Safety of the public, horticulturists and zoo keepers is vital. Well camouflaged electric fences, called ‘hot grass’ and ‘hot vines’ are used to keep animals in and visitors out. Sight lines need to be maintained but these ‘stand off’ gaps are well designed and are not obvious. Tree inspections are carried out annually and visual inspections made after storms.

Dublin Zoo is fortunate to have new glasshouses that allow the horticulture team to propagate and grow less common plants that are not easily available in the trade. Stephen is an active member of the Irish Garden Plant Society and this helps him to source new and unusual species.

There is a short lead-in time for any new planting in the zoo, usually less than a year, so they can’t grow all their own plants. Stephen showed us some of the prized specimens he was growing and generously offered that if we saw something we liked we could have it! I am now the proud owner of some Albuca clanbresilensis.

The gathering was very informative and as ever a great chance to catch up on the goings on around the country amongst growers and students.

Many thanks to Stephen Butler for introducing us to the planting and Terese Duffy for organising the visit.